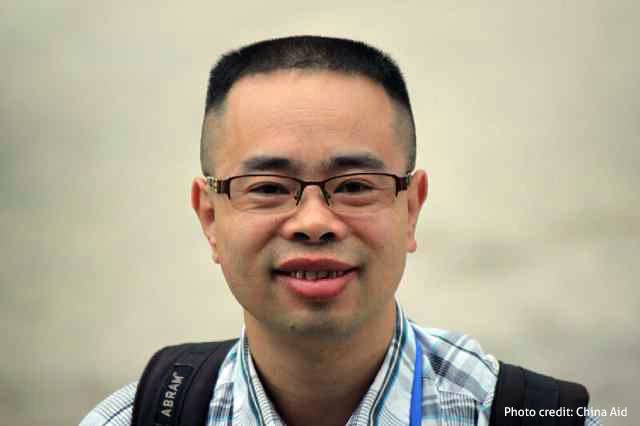 Living Stone Church started in 2009 with just 20 members meeting in one small apartment in Guiyang city, Guizhou Province. Four years later the church had 400 members, and they bought a space in a shopping centre. This drew the attention of the authorities, and since then the church – which now has over 700 members – has increasingly been targeted.

At Christmas 2014 government officials shut off the church’s power and water supply during a Christmas service. The church’s baptism ceremonies were attended by unexpected guests: several hundred police and security agents, monitoring the whole thing. When Living Stone decided to buy a bigger meeting space, government officials posted a notice urging the public not to take part in the church’s ‘illegal religious activities’. Almost all the church members have been pressurised to leave the church – they’ve had phone calls from officials, or been called in for meetings, or even visited at home by officials trying to force them to leave the church.

19 June 2018: Pastor Yang is released from prison after completing a two and a half year sentence, but is in urgent need of medical care.

You can encourage Living Stone Church today, by sending them a card. Pastor Yang’s wife, Wang Hongwu, said that she really appreciates the kindness shown by the people who have written to her.

Send your cards to:

Zhang Xiuhong, the former deacon of Living Stone Church, spent more than two years in detention. During the year she spent in pre-trial detention she wrote the following moving poem:

'This Year' by Zhang Xiuhong

I didn’t hear the sweet voice of my baby,
I didn’t embrace the wanderer come back from afar,
I didn’t see my loved one’s thin and weak figure,
I didn’t have heart-to-heart talks with my sister,
I didn’t taste the delicious food prepared by my mother-in-law,
I didn’t bask in the rays of the morning sunlight,
Or take a stroll as the sun sets.
Or ride on a high-speed train to go somewhere.

Was this a tough year for me? Painful? Lonely? Living each day like a year? Absolutely not!

19 June 2018: Pastor Yang is released from prison after completing a two and a half year sentence, but is in urgent need of medical care.

7 August 2017: Zhang Xiuhong is released after spending more than two years in detention.

6 January 2017: Pastor Yang Hua is sentenced to two and a half years in prison.

January 2016: The church submits a legal complaint to the Nanming District City Urban Administrative and Law Enforcement Bureau with the assistance of their lawyer Li Boguang.

16 December 2015: Pastor Su is briefly released, but told that he will soon be arrested and prosecuted for the crime of leaking state secrets.

15 December 2015: A female church member is detained for posting an article about the government’s treatment of the church.

Early December 2015: ‘Directorate for dealing with the Living Stone Church according to the law’ is leaked.

18 November 2015: ‘Rectification Order’ from the Nanming District City Urban Administrative and Law Enforcement Bureau. The order informs the church that their use of the commercial building as a place of church assembly is illegal. Pastor Su’s home is visited by agents.

November 2015: The church issues an open letter to the Urban Enforcement Bureau, stating that they are being subjected to unlawful coercion and persecution.

May 2015: Bureau of Civil Affairs declares the church an ‘illegal organisation’.