In 2013 the Zhejiang provincial government in China launched the ‘Three Rectifications and One Demolition’ campaign with the reported aim of demolishing illegal structures which violate law and regulations relating to land management and urban and rural planning. In 2014 and 2015 hundreds of churches and church-run buildings in the province were wholly or partially demolished, or threatened with demolition, apparently in connection with this campaign. In the vast majority of cases it is the church’s cross which has been removed, and where whole buildings have been demolished, the cross has usually been removed first. Many Christians in the province believe the churches are being deliberately targeted for demolition.

Zhejiang Province is home to the city of Wenzhou, sometimes referred to as ‘China’s Jerusalem’ due it its significant Christian population. Until this year, Wenzhou’s churches were considered to be some of the most wealthy and influential in China. Zhejiang is also known for its entrepreneurial spirit and rapid economic development.

The recent events in Zhejiang therefore came as a complete surprise both to Chinese Christians and to foreign observers. Many have interpreted the authorities’ actions as a sign that the environment in China in general is becoming more conservative under President Xi Jinping. Some believe the demolitions are the work of Party Secretary Xia Baolong and the provincial authorities, in response to the growth and wealth of churches in Zhejiang. Others believe this is part of a centrally-orchestrated, top-down plan to be rolled out across the country, which aims to bring in line those registered churches which have become ‘too independent’, and pressure unregistered churches to register. The government maintains this is all part of a campaign to target illegal structures, and has nothing to do with religion.

CSW has collated over 700 reports in total of: 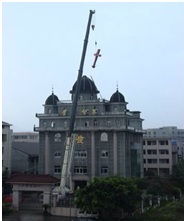 • Whole or partial demolition of a Catholic or Protestant church or church-run building;
• Notice of demolition or cross removal;
• Forced removal, demolition, modification or covering of a cross;
• Related injury, and detention, arrest or summons in connection with demolitions in Zhejiang Province.

Incidents with specific dates and locations, just over 500, are included on the timeline. In addition, the timeline includes notices and statements by the local authorities and central government, and actions by Christians in response to the events.

CSW has not been able to verify all the information in the timeline, although we have endeavoured to use a variety of sources, which can be found in the timeline entries. By presenting the events in Zhejiang through this timeline, we want to let you come to your own conclusions about the possible reasons behind these unprecedented events. 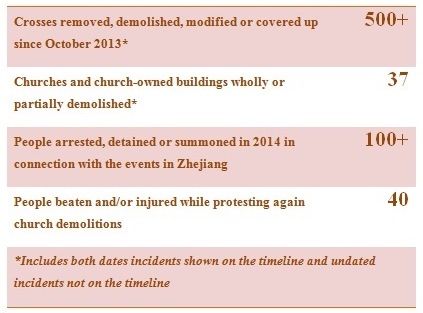 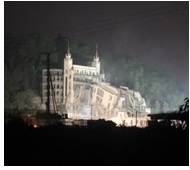 • The timeline only includes incidents where exact dates are reported. CSW has found over 200 incidents of forced removal and demolition of a cross, as well as further cases of detention, injury, and notice of demolition, but the exact dates for these incidents are not known. If these are included, the total number of incidents is 752 as of July 2015;

• The churches involved are Catholic and Protestant, registered and unregistered/independent, and of various sizes and ages. Xinde Church, the first Christian church in Xiangshan County, is 140 years old, while the largest churches claim thousands of members;

• This is not an exhaustive list: many sources claim that over 1,200 churches have been affected by this campaign. This timeline charts incidents, not churches, and is designed to show the scope and development of the campaign’s impact on churches, rather than serve as a complete log.