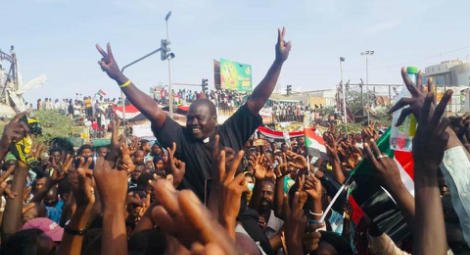 Churches in Sudan have called for democracy, human rights and equal citizenship in statements delivered at a Christian service held on 14 April at the sit-ins staged around the Sudan Armed Forces (SAF) and National Intelligence and Security Services (NISS) headquarters in Khartoum.

Church leaders representing the Sudanese Evangelical Presbyterian Church (SEPC), the Baptist Church and the Sudanese Church of Christ were present at the demonstrations to participate in the call for change and reform in Sudan.

The service included a presentation from church leaders and hymns, which were sung by both Christian and Muslim demonstrators. A local source told CSW that “when the protestors saw the Christians joining the demonstrations they were very happy.  They were extremely excited to sing with us.”

In a statement shared after the event  Rafaat Sameer Masaad, head of the Evangelical Synods in Sudan, said: “This is not a time for compromise or ‘pain killers’ or ‘gradual change’, this is a time to show a true mutual will to achieve and implement democracy. This is a time to move away from the trenches of religious and ethnic discrimination and head towards an inclusive and unifying Sudanese national identity for all of us. This is the time to open the door for equal opportunities and better life for all. We must make a covenant that we will not withdraw or accept anything less than a new Sudan ruled by humanity and citizenship.”

Christians have participated in the demonstrations since December 2018 and some have also been killed, including Christian student and activist Nasheed Saeed, who died in the cross fire between military officers and special security police on 8 April. However, due to the repression churches and church leaders have experienced over the last five years, an official church position on the protests had not been adopted. Of the church leaders present at the demonstrations, a number had been arrested, detained or had experienced restrictions on their places of worship since 2011.

On 11 April, the day after the coup, Christians stood arm in arm to protect Muslim protestors from the military while they participated in Friday prayers at the sit in.

CSW’s Chief Executive Mervyn Thomas said: “The willingness of Sudanese Christians to protect Muslims as they pray and of Muslims to participate in Christian worship and prayers at the heart of the demonstrations illustrates the inclusive nature of this uprising. We hope these acts will mark the beginning of a ‘New Sudan,’ where all people are treated as equal citizens, and where Sudan’s ethnic, religious and cultural diversity are respected both in law and in practice.”

Ahead of the coup d'état that deposed President Bashir, the Sudanese Professionals Association had issued a statement to the Church urging it to join in the protests. The statement, entitled ‘A Call to the pastors and Christian religious leaders’ said that the struggle the church has endured had not escaped the attention of the Sudanese people, and the protests illustrated the Sudanese spirit of peace, tolerance and non-violence, which had been instilled by the church: “You have suffered sectarian and psychological restrictions for years … [which have left you] without the right to worship freely… we invite you to raise your prayers and sing hymns for our country.”

Sudan is currently being led by a Military Transitional Council (MTC) which took power from President al Bashir on 11 April. The MTC has engaged in dialogue with representatives of the Sudanese Professionals Association (SPA).  However, no formal decisions or agreements have been made in terms of the composition of a civilian led transitional council, which is one of the key demands of the protesters.

Under the state of emergency, the military has suspended the constitution, and parliament has been dismissed. Moreover, the MTC has announced that President al Bashir will not be transferred to the International Criminal Court (ICC), where he is wanted for atrocity crimes committed in Darfur, but will face trial in Sudan. The MTC is also considering the arrest of other leading members of the National Congress Party (NCP). On 15 April, a joint letter by Sudanese, African and international civil society organisations called for the protection of the democratic will of the people of Sudan and supported demands for an urgent transition to a civilian government.

CSWs Chief Executive Mervyn Thomas said: “We call on the recently installed Military Transitional Council to transfer power to a civilian-led transitional council that represents the diverse interests of the Sudanese people, enjoys the support of the demonstrators, and can implement the necessary reforms through meaningful, inclusive dialogue and consultations. Discussions on the future of Sudan, including the criminal prosecutions of former President al Bashir and members of his administration, should be made by an independent authority, not the military, and we urge the African Union and UN member states to encourage the Sudanese military to transfer power to a civilian-led administration without further delay."