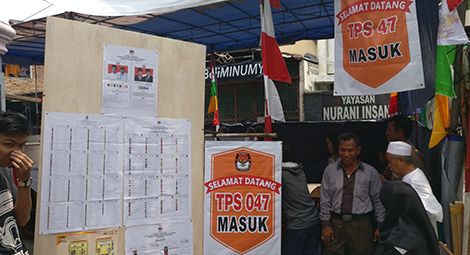 On 17 April 2019 Indonesia, the world’s third largest democracy, held elections in which over 190 million people cast their votes for the presidency and the national, regional and local legislatures, in one of the world’s biggest and most complex democratic exercises in recent times. Indonesia is the world’s fourth most populous nation, with a population of 262 million people,1 and the world’s largest archipelago, with an estimated 17,508 islands stretching across the Indian and Pacific Oceans. Furthermore, it is the largest economy in South-East Asia, the world’s sixteenth largest economy, and predicted to be the seventh largest in the next 20 years. Indonesia is also the world’s largest Muslim-majority nation, in which an estimated 13% of the world’s Muslim population resides.

The election followed what almost all observers and participants acknowledge was the most divisive presidential campaign in the country’s recent history. Election day itself was calm, peaceful and orderly, and there was no violence or turmoil following the initial ‘quick count’ results which consistently gave the incumbent president Joko Widodo victory with 55% of the vote over his rival, former General Prabowo Subianto, who received approximately 45%. However, when the official results were announced on 21 May, confirming the victory of President Widodo, violent riots erupted in Jakarta and elsewhere, resulting in the deaths of at least six people.2 Moreover, the campaign itself featured religion, religious intolerance and identity politics as much more prominent themes than in any previous campaign, and threatened to further tear at Indonesia’s proud tradition of religious pluralism.

Furthermore, even before voting concluded, Prabowo Subianto declared victory, claiming to have won with 62% of the votes.3 Two days after the election he held mass prayers in front of his house to celebrate his ‘victory’, even though the ‘quick count’ gave President Widodo a ten point lead.4 A month later, he still claimed to have won, but with 54.24%.5 Prabowo threatened to reject the official results if they did not confirm his victory, and to mobilise a ‘people’s power movement’, thereby being complicit in sparking the riots in May 2019. A man who supported Prabowo and threatened in an online video to behead President Widodo was arrested in May 2019, a month after the election.6

CSW visited the country from 8-29 April, specifically in order to follow the election in the final week of the campaign, election day itself, and the immediate period after the election, and to research the situation of freedom of religion or belief in the current political context. CSW had meetings with religious leaders, government advisors and civil society in the capital, Jakarta, and visited Medan in North Sumatra, Surabaya in East Java, and Pontianak in West Kalimantan where we met with religious and civil society actors.