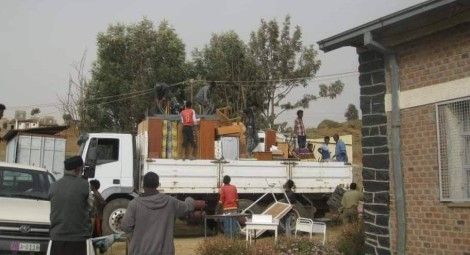 Property belonging to the health centre is loaded onto a lorry

Several Catholic nuns were evicted and their belongings removed from health centres where they worked and lived in Eritrea’s central zone on 2 July. Photographs of the evictions emerged on Facebook on 3 July.

The pictures, which according to local sources largely depict events in Zaghir, show a group of around 25 men removing property from the health centre.  Beds, bedding, cupboards, chairs, tables and other property belonging to the health centre are loaded onto a lorry, as a priest and five nuns look on. Local sources report no inventory being done of the health centre’s property, thus there is no way of knowing where it was taken.

The evictions began a little over a week after a Catholic nun was arrested in Keren, and have reportedly continued. Local sources indicate that following the evictions the nuns were left to “fend for themselves.”

In May 2002, Eritrea introduced a registration policy that effectively outlawed all religious practices not affiliated with the Catholic, Evangelical Lutheran or Orthodox Christian denominations and Sunni Islam, and began a campaign of arrests targeting unsanctioned denominations that continues to date, and that also affects the officially sanctioned religious communities.

On 2 July, during her interactive dialogue with the United Nations Human Rights Council (HRC) the UN Special Rapporteur on the situation of human rights in Eritrea expressed regret at the fact that despite positive regional developments following the signing of a joint declaration of peace with Ethiopia, there had been “no tangible improvement in the situation of human rights in the country.  The dividends of peace are not yet benefiting ordinary Eritreans, nor is there any sign to suggest they will.  As a result, hundreds continue to flee the country every month.”

On 3 July, the Permanent Missions of Austria, Australia, Belgium, France, Germany and the Netherlands tabled a resolution that calls for the renewal of the special rapporteur’s mandate.

CSW’s Chief Executive Mervyn Thomas said: “The forcible eviction of nuns from these facilities demonstrates once again the necessity for the Human Rights Council to renew the mandate of the Special Rapporteur. On a daily basis Eritrean citizens experience egregious and comprehensive abuses, including of the right to freedom of religion or belief. Continued human rights monitoring is essential. We urge the Eritrean authorities to allow the nuns to return to the health centres immediately and without condition, to restore all property confiscated from these facilities, and to allow the Catholic Church to continue its important work of providing vital medical assistance to vulnerable communities in remote areas of the country.”