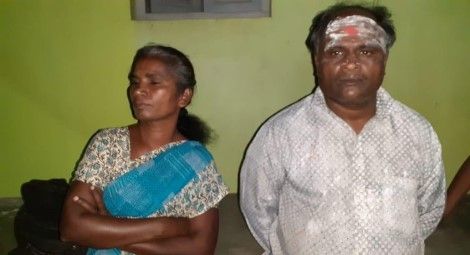 CSW has called on police in Tamil Nadu, India, to take action to investigate an incident on 5 March in which a Christian couple from Pakkam village, Gudiyatham, Vellore District in the state were assaulted and humiliated for sharing Christian gospel tracts.

Babu Phinegas and his wife Esther have been local traders for the past ten years. They have a daily routine of selling soap and detergent products to homes in the area between 9am and 4pm, and for two hours after work, they distribute Christian tracts. According to local sources, as the couple were distributing flyers in the village on 5 March, members of the Hindu nationalist groups Rasthriya Swayamsevak Sangh (RSS) and Hindu Munani confronted the couple and summoned another 50 people from the RSS and Hindu Munani to join them.

The couple were assaulted and humiliated in the presence of the villagers. In a recorded video clip, one of their attackers can been heard asking the couple for their family names, claiming that they were once Hindus and are now ‘agents’ who are trying to destroy the Hindu religion. He goes further to say that the couple were attempting to convert people so that they would get favours and recognition from the church. Sources report that the men forcefully applied ‘vibhooti’ (sacred ash) and ‘kungumam’ (red powder), which are used as religious markings on the forehead, a Hindu religious practice. When Esther refused, eye witnesses said that some local village ladies threatened to beat her with a house broom.

Local sources report that it is common practice in India for the perpetrators of such attacks to record the intimidation and harassment on their mobile phones and circulate it on social media so that others can be emboldened to do the same. Pastor C.J Zeba, the Coordinator of the Tamil Nadu Christian Network, told CSW that a complaint has been made to a local police station, but the police have repeatedly neglected to register a First Information Report (FIR) which is required for the police to conduct an investigation.

Pastor Zeba said: “Christians have become very vulnerable to attacks, abuse and intimidation. The space to practice and talk about their faith has become so reduced, particularly now with a growing culture of intolerance being perpetrated by the Hindu Munani and the RSS. Nothing is visibly being done to protect the rights of religious minorities, including Christians who have been in this country from so many generations. It is sad to see that not just in Tamil Nadu, but the rest of India is going down a path where religious minorities will become second class citizens.”

In recent years Christians in Tamil Nadu who distribute tracts have become increasingly targeted with intimidation and assault. According to a 2019 report by the Religious Liberty Commission of the Evangelical Fellowship of India, there were 60 reported incidents of hate and violence in Tamil Nadu last year.

CSW’s Chief Executive Mervyn Thomas said: “CSW is deeply concerned by the awful experience endured Babu Phinegas and his wife Esther, who were targeted merely for distributing Christian tracts. As citizens of India, it is their constitutional right to share their faith and they must feel free to do so without any risk or harm. We urge the local police to act quickly and register the case so that the matter can be given due legal attention. We also call on the police to hold the perpetrators to account for their actions.”