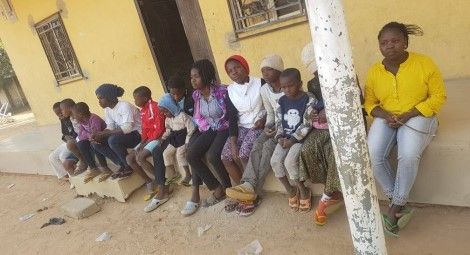 Children from the Du Merci Centre at the government-run orphanage.

Six children from the Du Merci Centres in Kano and Kaduna States, Nigeria, temporarily escaped the government-run Nassarawa Children’s Home in Kano, where they have been held since December 2019, to attend church for the first time.

According to Mrs Mercy Tarfa, who co-founded the Du Merci orphanage with her husband Professor Solomon Tarfa in 1996, the children approached a security guard at the gate of the Nassarawa Children’s Home between 8 and 9am on Sunday 15 March and asked permission to attend church. After the guard refused to allow them to leave, the children forced their way out.

According to The Punch Nigeria, police were called to the scene to look for the children, all but six of whom were found on a street close to the Nassarawa home. They continued to search, interrupting a service at an Evangelical Church Winning All (ECWA) near the home, but the children were not there. At around 12pm on the same day Mrs Tarfa received a phone call from a church leader in Sabon Gari, who informed her they were at his church. She proceeded to collect them, accompanied by her lawyer, and returned them to the government-run home.

On 17 March Mrs Tarfa’s lawyers were asked to attend a 5pm meeting with the police commissioner, but were excluded from the meeting. They were later informed by the deputy commissioner of police that the Attorney General of Kano state would be in touch with them.

The twenty-seven children have been in the government-run home since being removed from the Du Merci orphanages in December 2019. Their current situation was described to CSW Nigeria (CSWN) as being physically, emotionally and psychologically challenging - and deteriorating. They have not been allowed to leave the premises, even to attend school or church, have faced verbal and physical abuse, and have been under pressure to convert. Local sources have also reported that on 21 February one of the children was physically assaulted by police officers in the presence of the Commissioner of Women’s Affairs.

In addition, initial reports by the state police and other authorities that the seized children are aged between 3 and 12 have proved erroneous, as the group includes a 30 year-old female graduate, a 22 year-old man, and a married woman who is over 22 years old who was visiting the home with her new born baby.

CSW’s Chief Executive Mervyn Thomas said: “CSW is deeply concerned by the unnecessary restrictions on the children from the Du Merci Centre, which violate their rights to freedom of religion or belief and education, amongst others. The children are being treated like prisoners, and reports that one of them has been physically assaulted should be of utmost concern. We call on the government of Kano state to allow these children to return to the Du Merci Centres, which they consider to be their home.”

Concerns also remain for Professor Tarfa, who has been detained since 25 December 2019 on excessive charges. The professor was granted bail on 3 January, but on terms so steep he has been unable to meet them. On 3 March he was arraigned by the Attorney General, who has reportedly taken over the case in the Kano State High Court on fresh charges identical to the previous allegations.

This is not the first time the professor has been arrested in an attempt to close down the orphanage. Both he and Mrs Tarfa were initially detained in 2002 following a similar raid on the orphanage. During a Prayer and Advocacy programme organised by CSWN last week, Mrs Tarfa informed those assembled that “the same judge who was in the matter in 2002 is the same judge handling the matter at the High Court now. In fact the Chief Justice of Kano State said he should be included in the matter because he is interested in the case. [...] My husband has been in prison for 3 months and counting. We were refused giving him food severally because the prison/state officials prevented us."

Mr Thomas added: “CSW continues to call for the immediate and unconditional release of Professor Tarfa, who has been targeted with totally unfounded charges. For over two decades, the Du Merci Centre has undertaken commendable work in caring for vulnerable children, providing stability in a family environment, and successfully bringing them through to adulthood. The government of Kano state must allow this work to continue and ensure that due process is observed in all proceedings.”

1.       CSW has launched a campaign calling for the immediate release of Professor Tarfa. Click here to view the petition.