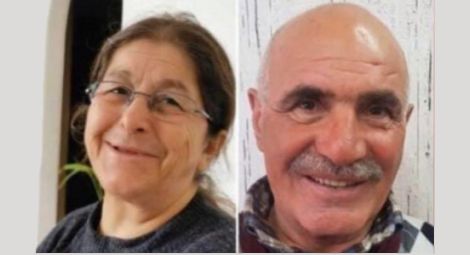 Simoni Diril and her husband Hurmuz

The body of Şimoni Diril, 65, was found on 20 March 2020 in a mountainous place near the village of Mehre (Kovankaya) in the Beytüşşebap District of Şırnak Province in south-eastern Turkey, where she had been abducted along with her husband, Hurmuz, who remains missing.

Mr and Mrs Diril were abducted on 11 January 2020. Their son, Father Remzi Diril, is the priest of the Catholic Chaldean Church in Istanbul.

CSW previously reported that the couple had received several threats in the past from Turkish and Kurdish residents. Many Assyrian activists believe that the abductors’ aim is to frighten the remaining Christians in the area into leaving their ancestral land.

CSW’s Chief Executive Mervyn Thomas said: “We are deeply saddened by the death of Şimoni Diril and extend our sincere condolences to Father Diril and the rest of Mrs Diril’s family and loved ones. We are also gravely concerned for the wellbeing of Mr Hurmuz Diril, whose whereabouts and condition remain unknown. We call for a full and intensive investigation into their case and urge the Turkish authorities to expedite efforts to secure Mr Diril's release, and to take extra measures to protect the Christian minority, and to tackle hate speech, anti-Christian sentiments and all forms of religious discrimination in Turkey.”

In other news, the hearing of Assyrian Christian Priest, Father Sefer Bileçen (known as Father Aho), which was scheduled for 19 March, has been postponed due to concerns regarding the spread of COVID-19. Father Aho has been charged with joining a terrorist organisation based on allegations that he provided food and water to members of the People's Defence Forces (HPG) when they visited his monastery. The HPG is the military wing of the Kurdistan Workers' Party (PKK), which has been designated a terrorist organisation by Turkey. Reports indicate that PKK fighters have historically punished civilians who refused to give them food.

Mr Thomas continued: “CSW continues to call for the immediate and unconditional release of Father Aho, who faces unfounded accusations. We urge the international community to raise this case and others in which Christians have been arbitrarily targeted with Turkey at every opportunity.”