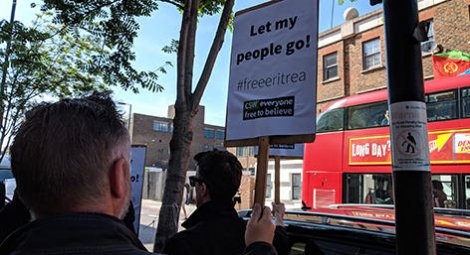 CSW, Church in Chains (Ireland), the Eritrean Orthodox Church in the UK, Human Rights Concern-Eritrea and Release Eritrea will be hosting an online protest against the continuing repression of Freedom of Religion or Belief in Eritrea on 28 May.

In light of lockdown restrictions in the UK, the annual protest, which usually takes place outside the Eritrean embassy in London, will instead take place online, and will include a one-hour online prayer service, with contributions from each of the organising groups and a number of special guests, including Lord Alton of Liverpool and Eritrean Gospel artist Helen Berhane.

In March 2002, the Eritrean government effectively outlawed all practices not affiliated with the Catholic, Evangelical Lutheran or Orthodox Christian denominations and Sunni Islam, and began a campaign of arrests targeting unsanctioned denominations that continues to date, and that also affects the officially-sanctioned religious communities. While a 2018 rapprochement between Ethiopia and Eritrea was accompanied by human rights improvements in Ethiopia, similar developments are yet to occur in Eritrea.

Tens of thousands of Eritreans are currently detained without charge or trial in life threatening conditions in more than 300 sites across the country. Among them are a significant number of prisoners of conscience, some of whom have been detained for decades on account of their political views or religious beliefs.  On 23 May Reverend Haile Naizge, chairman of the Full Gospel Church and Dr Kuflu Gebremeskel, chairman of the Eritrean Evangelical Alliance and member of the executive committee of the Full Gospel Church of Eritrea, marked their 16th year in incommunicado detention.

In a statement issued on 2 April, United Nations (UN) Special Rapporteur on the situation of human rights in Eritrea, Daniela Kravetz, highlighted that “in 2019 alone, more than 200 individuals were imprisoned because of their faith.”

One of Eritrea’s most high-profile prisoners of conscience is the legitimate Eritrean Orthodox patriarch Abune Antonios, 92, who has been under house arrest since January 2007. He was removed from office in 2006, in violation of canon law, for repeatedly objecting to government interference in ecclesiastical affairs and refusing to expel 3000 members of the Orthodox renewal movement, Medhane Alem. His removal cemented the government’s control of the Eritrean Orthodox Church and created a schism in the Church. In 2019 a letter dated 17 July, ostensibly from six bishops but signed only by five of them, accused Patriarch Antonios of having committed heresy, and stripped him of all official authority in an attempt to excommunicate him.

CSW’s Chief Executive Mervyn Thomas said: “We may be on lockdown, but we will not be silenced. For the 17th year in a row, we will be protesting the severe repression of freedom of religion or belief in Eritrea, which a UN Commission of Inquiry on Eritrea has deemed a crime against humanity, and the ongoing detention of Christians without due process for peacefully practicing their faith.  We will continue calling on the Eritrean authorities to release all prisoners of conscience, including those detained on account of their religious beliefs, and will stand in solidarity with the Eritrean people until every prison door is opened and all who have been detained unjustly are set free.”

1.       For further information on the online event please visit: https://www.csw.org.uk/freeeritrea

2.       Click here to read a briefing on freedom of religion or belief in Eritrea.