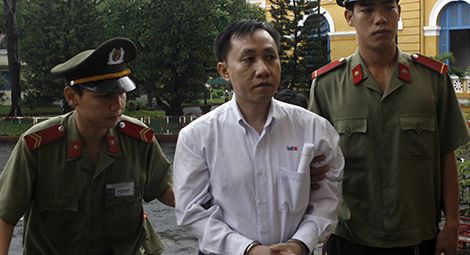 Vietnamese human rights defender Nguyen Bac Truyen and other prisoners of conscience held in An Diem prison in Vietnam are on hunger strike to protest unjust treatment by prison officials.

Nguyen Bac Truyen’s hunger strike began on 26 November and will continue until the prison conditions and treatment are improved. Truyen and others are protesting about lack of access to medical care and confiscation of letters from prisoners to their families without explanation, among other things. Several prisoners have also requested transfers to prisons closer to their families, as prisoners of conscience are often imprisoned far from their homes which makes it difficult for their families to visit. Their requests have been ignored.

According to a source familiar with the situation, Truyen and the other prisoners understand the health risks of a prolonged hunger strike but say this is a last resort, because they have no other way to demand improved conditions.

Nguyen Bac Truyen is a Hoa Hao Buddhist and legal expert who has provided pro bono legal assistance to families of political prisoners, victims of land grabs, and persecuted religious communities. He was abducted by the Vietnamese police on 30 July 2017 in Ho Chi Minh City and held in incommunicado arbitrary detention in Hanoi until his trial. In April 2018, he was charged with ‘carrying out activities aimed at overthrowing the government’ under Article 79 of the Vietnamese penal code and sentenced to 11 years in prison. In October 2020, Truyen was awarded the Stefanus Prize 2020 for his work promoting human rights in Vietnam, including freedom of religion or belief.

This is not the first time Nguyen Bac Truyen has gone on hunger strike in prison. In May 2019, CSW reported that Truyen and three other prisoners of conscience had coordinated a hunger strike to protest the grievous ill-treatment of a fellow prisoner, Nguyen Van Hoa, a young Catholic activist sentenced to seven years in prison in a closed trial in November 2017. Hoa’s former cellmate reported that Hoa had sustained bruises and abrasions, and had been choked by a prison guard. He has also been beaten on previous occasions and held in solitary confinement with his feet shackled.

CSW’s Founder President Mervyn Thomas said: “The fact that Nguyen Bac Truyen and others have been forced to go on hunger strike as the only way of having their demands heard, reflects the sad reality of the situation of prisoners of conscience in Vietnam. CSW reiterates that Truyen should not be imprisoned in the first place. We continue to call for his immediate and unconditional release, and urge the Vietnamese authorities to ensure that those who stand up for human rights in the country are free to do so without fear of harassment, violence or imprisonment.”