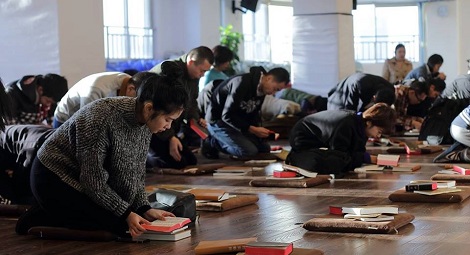 Today, 9 December, marks the second anniversary of a series of raids on Early Rain Church by authorities in Chengdu, China, in which police searched church members’ homes and arrested over 100 seminary students, church members and leaders, including Pastor Wang Yi.

Two years on, Wang Yi and one of the church’s elders, Qin Defu, remain in prison serving sentences of nine years and four years respectively. Members of the church continue to be harassed, prevented from meeting, and threatened with eviction. On 12 October 2020, Pray for Early Rain Covenant Church Facebook page reported that church elder Li Yingqiang was taken to the police station for questioning. He and his family were once again threatened and pressured to leave Chengdu. They were told, “As long as you are here, we will make sure you can't do anything or see anyone.”

CSW’s Founder President Mervyn Thomas said: “On the second anniversary of the large-scale crackdown on Early Rain Church, we reiterate our calls for the release from prison of Pastor Wang Yi and Elder Qin Defu. We also call for an end to the harassment and intimidation of Early Rain church members and for this case to be raised with the Chinese government in bilateral dialogues with the UK government, alongside concerns about recent laws and policies contributing to the deterioration of freedom of religion or belief in the country.”

Last month the Ministry of Justice published a draft document on Detailed Implementation Measures on the Administration of Foreigners' Group Religious Activities in the Mainland Territory of the P.R.C. (Draft Revisions for Solicitation of Comments). The draft sets out a list of religious activities by foreigners which require official permission.

In a separate development on 7 December, the Good Neighbour North District Church in Hong Kong reported that its HSBC bank account, and the accounts of its Pastor Chan Hoi Hing Roy and his wife, had been frozen. In an open letter to HSBC posted on Facebook, the church said the accounts were frozen without any prior notification nor justification, and claimed that the actions were an “act of political retaliation” for their group “Safeguard Our Generation”,  which offered humanitarian aid to protestors.

The church provides various other welfare services including support for homeless people, and there are fears that the decision to freeze their accounts will result in the termination of these services.

Mervyn Thomas added: “This recent development comes amid a rapid and alarming crackdown on civil society in Hong Kong. In August 2020 CSW issued a briefing on the new national security law and its potential impact on freedom of religion or belief warning that its broad provisions might have a ‘chilling effect’ on civil society, including religion or belief communities. Sadly, the events of the past year have borne out our worse fears about the national security law, with the arrest of activists, lawmakers and media figures. We call on the Hong Kong authorities to immediately reverse this worrying direction of travel, and we further call on the international community to take a stronger stand on the violations in Hong Kong.”

1.       An English translation of the Detailed Implementation Measures on the Administration of Foreigners' Group Religious Activities in the Mainland Territory of the P.R.C. (Draft Revisions for Solicitation of Comments) is available from China Law Translate.