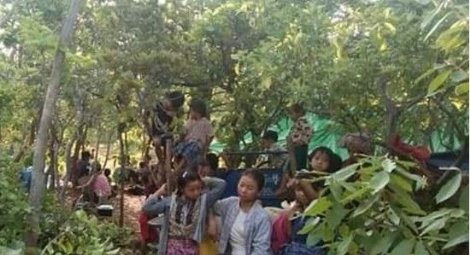 CSW and HART have expressed alarm at the launch of military air strikes in Myanmar/Burmas Kayah State on 31 May and call for an end to the violence.

Two military helicopters opened fire in Demoso Township, Kayah State, on 31 May, accompanied by heavy artillery shelling. The air strikes marked a worrying escalation of military attacks in the State, where four civilians were killed in an attack by the Myanmar army on a Catholic church in Kayan Thar Yar village on 24 May, against the backdrop of a wider crackdown on civilians in the aftermath of the military coup on 1 February.

Conflict erupted in Kayah State on 21 May between youth civilian militia, many armed with makeshift weapons, and the Myanmar Army. The military regime imposed martial law, barring people from leaving their homes in the state capital of Loikaw after 9am. There have been several reports of civilians being shot for travelling outside the curfew. Clashes have spread throughout the State.

Updates from the State are limited as electricity has been cut off from several areas, the internet and other communications have been limited and news organisations have been raided. Supplies of many goods are running low and prices of essential products, such as fuel and rice, have skyrocketed. There are fears of a food shortage.

An estimated 70,000 civilians have been displaced across the state and its borders as tens of thousands of have fled the violence, taking shelter in camps set up by local communities which are at risk of being washed away in the seasonal monsoon rains. Internally displaced persons (IDPs) are in urgent need of food, medicine and humanitarian support.

Humanitarian aid access and distribution has been severely constrained by the regime. Military forces have killed several local volunteers providing humanitarian support and arrested others, blocked access to the state from Shan State in the north and cut transport to Loikaw, the capital of Kayah State, destroying bridges and blocking roads.

Baroness Cox, Chief Executive of Humanitarian Aid Relief Trust (HART), said: “The crisis in Kayah State is the latest an unfolding emergency throughout Myanmar/Burma, especially in the ethnic states where the military has intensified its offensives against the ethnic nationalities since the coup on 1 February. There is a very urgent need for action by the international community to provide emergency cross-border humanitarian aid and increase pressure for a global arms embargo to cut off  the flow of weapons to this brutal regime. There is also a need for efforts at the United Nations Security Council to intensify diplomatic pressure and establish an accountability mechanism to bring the perpetrators of atrocities to justice.”

Benedict Rogers, CSW’s Senior Analyst on East Asia and author of three books on Myanmar, said: “The reports from Kayah State reveal a shocking use of force by the Myanmar military against unarmed civilians, and it follows similarly brutal attacks in Karen, Kachin and Chin States in recent weeks. Myanmar faces a grave humanitarian emergency and there is an immediate need for the international community to increase pressure on the military regime to stop its reign of terror. We need more targeted sanctions against military enterprises, a global arms embargo, cross-border humanitarian aid and international justice and accountability. The UN Secretary-General should step up his efforts to mobilise a rapid, targeted and practical response to this appalling crisis.”