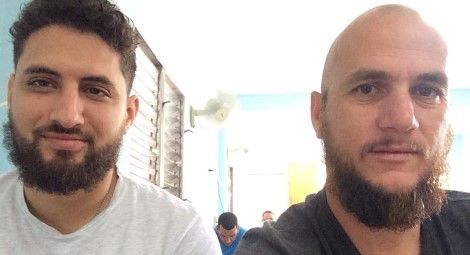 The wife of a Cuban pastor who was detained amid unprecedented nationwide protests in Cuba on 11 July has issued a statement calling for information regarding his current situation and well-being.

Pastors Yéremi Blanco Ramírez and Yarian Sierra, both tutors at the William Carey Biblical Seminary in Matanzas and both associated with the Berean Baptist denomination, are being held in poor conditions in a wing of the Matanzas women’s prison. The president of the seminary, Reverend Jatniel Peréz, is under constant surveillance by state security and has been prevented from leaving his home.

In statement sent to CSW, Adelys Rodríguez Reyes, the wife of Pastor Blanco Ramírez, writes: “Our family and that of Yarian Enmauel Sierra are desperate because we have no news of them. They told us where they are holding them, but they have not even given us the right to call them, nor have they told us how they are, nor have they given us any news at all. Until when?! Until when are we going to have to endure the abuse, mistreatment, the injustice! I am making a call to the world please, they are killing people, disappearing people, beating them, murdering parents in front of their children. Help us!!!! Our families are suffering. I call on Christians in Cuba and in the world to pray and intercede for all the disappeared.”

Protests have been ongoing in Cuba since 11 July and have been met with a heavy-handed response from Cuban State Security. A number of protesters and religious leaders have been arrested, including Reverend Yusniel Pérez Montejo, a member of the Eastern Baptist Convention of Cuba.

Reverend Pérez Montejo has since been released, however he was subsequently subjected to a three-hour interrogation on 14 July, during which he was accused, though not formally charged, of incitement. Human rights activists on the island have confirmed that the majority of those detained are facing charges of 'incitement to  delinquency' with the aggravating factor of having done so during a ‘public calamity’. Numerous religious groups on the island have issued statements in solidarity with the protesters and repudiating the government’s calls to violence, including the Catholic Bishop's Conference, the Evangelical League, the Methodist Church of Cuba, the Assemblies of God of Cuba, and the Cuban Conference of Monks and Nuns.

CSW’s Head of Advocacy Anna-Lee Stangl said: “Our hearts go out to the families of pastors Yéremi Blanco Ramírez and Yarian Sierra, who continue to suffer with no news of the well-being of these two men. We call on the government to immediately and unconditionally release both pastors, and all those detained in connection with the peaceful exercise of their basic human rights, and to drop any criminal charges made against them. The Cuban Communist Party must also cease its harassment of religious leaders and others on the island and guarantee the right to expression, freedom of religion or belief and all other fundamental rights.”