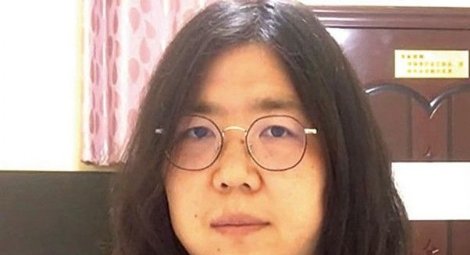 CSW urgently calls for the release of sentenced Chinese Christian human rights defender Zhang Zhan, whose health condition is in a critical state amid a continuous hunger strike against her unjust detention and imprisonment.

Ms Zhang was detained by Shanghai police for her reports from Wuhan on the coronavirus COVID-19 outbreak in May 2020. During her seven month pre-trial detention, she was forcibly fed by officials after she began a hunger strike. She was shackled and her hands were bound 24 hours a day for more than three months. According to her lawyers, by the time she was brought before Pudong New District Court in December 2020, her health condition had already seriously deteriorated and she required a wheelchair. In a closed-door trial that lasted less than three hours, the Court sentenced her to four years in prison for “picking quarrels and provoking trouble”, a charge frequently used by the Chinese authorities to target human rights defenders.

Reports have emerged that Ms Zhang has been on a partial hunger strike ever since. On 2 August, prison authorities informed her parents over the phone that Zhang had been hospitalised on 31 July, with symptoms indicating serious health conditions caused by severe malnourishment, including rapid weight loss and oedema.

CSW sources report that Ms Zhang’s parents have been concerned about her declining health during the 15 months since her detention. However, they have still not been allowed to visit her, even though she is in a critical condition.

After her sentencing trial, Zhang Zhan said to her lawyer during their last meeting in January, “I will continue to fight in a Christian way, even at the cost of my life. I will make them [the Chinese authorities] repent, and I will continue to pray for God’s great love to guide me.”

Zhang Zhan was one of four known cases of citizen journalists, including Fang Bin, targeted by the Chinese government for reporting on COVID-19 in Wuhan. Her sentencing prompted the Media Freedom Coalition to release a statement in January 2021, in which 16 members called for the release of at least 47 journalists in detention in China, including Ms Zhang.

CSW’s Founder President, Mervyn Thomas said, “CSW has repeatedly called for the immediate and unconditional release of Zhang Zhan. We reiterate this call today. Ms Zhang has been unlawfully imprisoned for exercising her fundamental rights to freedom of expression. The rapid deterioration in her health is alarming. We urgently call on the Chinese authorities to release Zhang Zhan on medical parole as soon as possible and to ensure she receives prompt and adequate medical care. We further call on the authorities to ensure her family is allowed to meet with her directly and receives timely and accurate information from medical professionals about her condition and status."