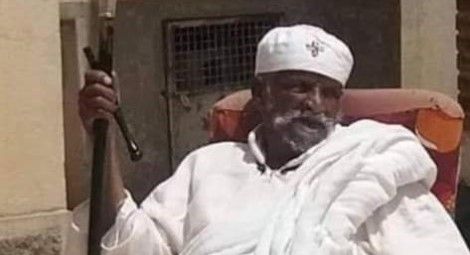 Patriarch Antonios laid to rest after death while under house arrest

CSW is deeply saddened by the death of the legitimate patriarch of the Eritrean Tehwado Orthodox Church, Abune Antonios, after 15 years under house arrest. Local reports indicate the 94-year-old patriarch died in the early hours of 9 February. The patriarch’s body was taken to the Abune Andreas monastery, to which he belonged, and he was buried there on 10 February at 9am local time.  Local sources report that a large crowd gathered at his burial site, many of whom had travelled long distances on foot.

Patriarch Antonios was removed from office for resisting the Eritrean government’s repeated interference in church affairs. Most notably, he had refused to expel 3000 members of the Orthodox renewal movement, Medhane Alem, protested the detention in November 2004 of three priests from the renewal movement, and objected to the imposition of Yoftahe Demitros, a pro-government lay person, as its general secretary.

In August 2005, Patriarch Antonios was removed from administrative control of the Patriarchate, confined to ceremonial duties, and eventually deposed in January 2006 following secret meetings of the Holy Synod that were convened in contravention of church canon. The patriarch remained under de facto arrest in his official residence until the early hours of 7 May 2007, when his personal pontifical insignia and clothing were seized, and he was officially placed under house arrest in an undisclosed location in the Eritrean capital, Asmara. Months later, he was illegally replaced by Bishop Dioscoros, a clergyman approved of by the Eritrean government, but who remained unrecognised by the Orthodox papacy in Egypt until his death in 2015.

Patriarch Antonios issued a strong response to the letter notifying him of his removal from office in which he excommunicated both lay and clerical individuals who had gathered illegally in the Holy Synod, declaring: “There is one thing that you need to be reminded of: No one can be above the law. Whosoever tries to trample the law underfoot will himself end up being trampled over by the law.”

The nonagenarian patriarch was not seen in public again until a tightly-managed appearance at St Mary’s Orthodox Cathedral in Asmara in July 2017. He later disappeared from public view once again after insisting on the public revocation of the accusations levelled against him as an assurance of genuine reconciliation. His conditions of house arrest, which had been somewhat eased, again became more stringent.

Since then, the patriarch was only seen in smuggled videos in which he continued to fearlessly criticise the conditions and grounds of his detention. In July 2019, and in seeming retaliation to one of these videos, five pro-government bishops signed a statement accusing Abune Antonios of having committed heresy, stripping him of all official authority and effectively excommunicating him. Once again, he responded defiantly, saying of his detractors: “The Eritrean Synod are the accusers and adjudicators, without listening to my side. They broke the law of the Eritrean Orthodox Church.”

Patriarch Antonios’ removal and mistreatment opened a deep schism in the denomination that is likely to be exacerbated by his death in custody. Many Orthodox adherents and clergy continued to support him, both in Eritrea and in the diaspora.  In June 2019 five priests from the Debre-Bizen Monastery in the Northern Red Sea Region were arrested, reportedly for supporting him and protesting government interference in church affairs.

On 13 May 2021 the Eritrean government confirmed a second uncanonical replacement, announcing that “His Reverend Abune Qerlos” had been elected the fifth patriarch and would be consecrated on 13 June. However, the Abune Andreas monastery was among many Orthodox sources and adherents who refused to accept him.

CSW’s Founder President Mervyn Thomas said: “Abune Antonios was a deeply principled man who prioritised his calling over the politicisation of the Church by a regime deemed to have committed crimes against humanity since 1991. Despite 16 years of unremitting pressure, mistreatment, and defamation, the patriarch never compromised, even when it could have led in his reinstatement. He chose instead to protect the integrity and doctrine of the Church with which he had been entrusted, at the cost of freedom and comfort in his twilight years. We urge the international community to honour Patriarch Antonios’ courageous stand for freedom of religion or belief by regalvanising efforts to secure the release of the three Orthodox priests for whom he advocated, as well as that of thousands of others detained arbitrarily in Eritrea on account of conscience, religion or belief. We also urge the Egyptian Orthodox authorities, to whom the late patriarch appealed his case, to ensure a succession that is in line with Church tradition. Recognising the current incumbent would be tantamount to legitimising the unjust and illegal removal, imprisonment and mistreatment of a hero of the faith.”