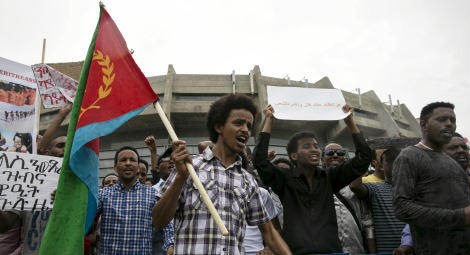 Although Article 19 of Eritrea’s constitution, ratified in 1997, states that ‘no person may be discriminated against on account of…religion’, the ruling People’s Front for Democracy and Justice (PFDJ) has not implemented this document, and claims to be drafting a new one.

In May 2002 Eritrea effectively outlawed religious practices not affiliated with the Catholic, Evangelical Lutheran or Orthodox Christian denominations, or Sunni Islam. Other religious groups must register in order to practise their faith; however, the registration process is onerous, intrusive, restrictive, and ultimately inconclusive. Moreover, even the four government-sanctioned religious communities experience harassment and repression.

Since 2002 thousands of adherents of non-recognised religious communities have been detained without charge or trial in inhumane, life- threatening conditions, where they may experience torture or even death. There are currently 20 members of the Jehovah’s Witness movement in indefinite detention. The number of Christian prisoners is more difficult to ascertain, but in September 2020 CSW’s sources confirmed the number to be over 300, including 39 children.

Notable is the case of Abune (Father) Antonios, the legitimate patriarch of the Orthodox Church who died on 9 February 2022 following 15 years of arbitrary detention. He was officially placed under house arrest in January 2007 after having been removed from office in 2006, in violation of canon law, for repeatedly objecting to government interference in ecclesiastical affairs. Apart from one tightly managed appearance in July 2017, the patriarch was not seen in public since his arrest, except in smuggled videos in which he criticised the conditions and grounds of his detention.

According to local sources, the nonagenarian patriarch, who was severely diabetic and suffered from high blood pressure, was kept in isolation and was not allowed visits, even from family members. In June 2019 five Orthodox priests from the Debre-Bizen Monastery were arrested, reportedly for supporting Patriarch Antonios and protesting government interference in church affairs. In July 2019 five pro-government bishops signed a statement accusing him of having committed heresy, stripping him of all official authority and effectively excommunicating him. In May 2021 the Eritrean government announced that “His Reverend Abune Qerlos” had been elected the fifth patriarch. Also in 2021, unconfirmed reports emerged that the patriarch had been forcibly injected with an unknown substance for the second time since 2017 that was adversely affecting his health.

Members of the Jehovah’s Witness movement have suffered severe mistreatment on account of doctrinal exigencies that meant they did not vote during the 1993 independence referendum, and requested to participate only in non-military aspects of national service. The community was stripped of citizenship rights; four who had declined active military service were detained in 1998 - and were only released in 2021 - and any caught meeting clandestinely face detention and harassment, including children and the elderly. Four have died in prison, and three elderly men died soon after being released, following harsh treatment in prison.

By law, military service is meant to last for 18 months, but in reality, it remains indefinite. Recruits receive minimal wages and are subject to forced labour. Young female recruits can face sexual harassment and violations by senior officers. Random military round-ups continue to occur.  On 4 February 2020, Shewit Yakob Gebretensae, 27, was shot dead in Mendefera by police who had attempted to seize him as he was walking home. Reports continue to emerge indicating young people, including the underaged, were seized from homes, streets, and marketplaces and forcibly conscripted in the lead up to and during the war in Tigray, Ethiopia.

In a report released in June 2016, the UN Commission of Inquiry on Human Rights in Eritrea (COIE) “found reasonable grounds to believe” that crimes against humanity, “namely enslavement, imprisonment, enforced disappearance, torture, other inhumane acts, persecution, rape and murder” have been committed in a “widespread and systematic manner” since 1991. These crimes were deemed to have been committed largely but not exclusively within the context of the military service regime.

Since the war in Ethiopia’s Tigray region began in November 2020, over 52,000 people have died, and an estimated 1.7 million have been displaced internally.

The Ethiopian government imposed a communications blackout at the beginning of the conflict. Nevertheless, reports continued to filter through of severe human rights violations perpetrated largely by Eritrean soldiers, who from the beginning fought alongside Ethiopian soldiers, by militia from the country’s Amhara region, and by Somali government forces who went to Eritrea for training and were sent to Tigray. These abuses include grievous acts of mass conflict related sexual violence, indiscriminate bombing of civilians and civilian objects, mass extra judicial killings, and attacks on sites of religious and historical importance.

Eritrean soldiers are implicated in the murders of Eritrean refugees, the destruction of two camps and the forced return of thousands who sought refuge in Ethiopia, some of whom were forcibly conscripted.  They also embarked on extensive looting. Civilians were forcibly deprived of money and jewellery on the streets, while homes were comprehensively cleared, including of blankets, cutlery, shoes, and clothing. Hospitals were emptied of medication, factories of equipment, and stores of goods. Anything not transported to Eritrea was destroyed. Livestock were seized, killed and eaten, while crops were burnt in fields. Farmers were prevented from preparing their fields for the rains, ensuring there would be no harvest.

There are now serious concerns that atrocity crimes may have taken place in the region, with violations, including rape as a weapon of war, ethnicity-based massacres of men and boys, and the targeting of churches, mosques, IDP and refugee camps, a market, and other civilian structures.

Tigray has remained under a de facto siege since the withdrawal of Ethiopian and allied forces on 28 June 2021, facilitating the continued use of starvation as a weapon of war. On 21 January 2022, the UNHCR reported that aid teams which had been able to reach remaining refugee camps in recent weeks found Eritrean nationals had died of preventable diseases, while others were scared and lacking food, medicine and clean water, amid warnings that food distribution in Tigray is an all-time low. Eritrean soldiers continue to occupy parts of Tigray, and are operating in the Oromia, Amhara and Afar regions, while security agents operate in Addis Ababa.

CSW has produced detailed briefings on the Tigray crisis, including information on ethnic profiling and hate speech towards Tigrayans across Ethiopia, reports of enforced disappearances, arbitrary detentions (including of young children), seizures and forced closures of some 48,000 Tigrayan-owned businesses in Addis Ababa, and on religious violations during the war.

A stringent COVID-19 related lockdown, enforced often with violence by the armed forces, not only provided the government with an additional means of curtailing freedom of movement, which was already severely restricted; it also provided cover for mass mobilisation and troop movement in the run up to the war on Tigray.  The extended lockdown also damaged an already fragile economy, and reports of widespread hunger continue to emerge, including from the capital Asmara, where people are further inconvenienced by an ongoing water shortage, and are reportedly resorting to cooking with firewood due to an erratic electricity supply.

Eritrea is the only country in the African Union to refuse all vaccinations, and recent reports indicate a steady rise in infections and deaths. The pandemic has also raised serious concerns for the wellbeing of tens of thousands of prisoners of conscience, who remain detained in unsanitary and ill-equipped, generally overcrowded facilities that can be makeshift and where conditions are life-threatening, with insufficient access to potable water, food or medical facilities.

To the government of Eritrea:

To the government of Ethiopia: