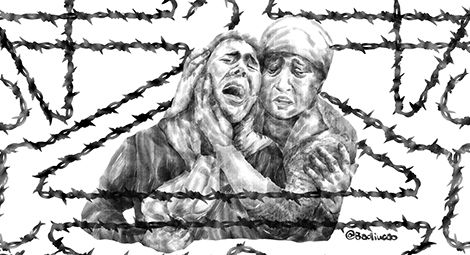 A BBC investigation revealing further details of the mass detention of Uyghurs in Xinjiang Uyghur Autonomous Region (XUAR) was published on 24 May, as the UN High Commissioner for Human Rights continues her six-day visit to China.

The High Commissioner’s itinerary includes plans to travel to the Uyghur region. Several relatives of individuals detained by the Chinese government have called on the UN High Commissioner to pay attention to the cases of their family members, including Ziba Murat, daughter of retired Uyghur doctor Gulshan Abbas, who called for the High Commissioner to be permitted to visit her mother who had been sentenced to 20 years in prison. Separately, Zhang Qingzhen, the sister of writer and activist Zhang Haitao who is serving a 19-year prison sentence in XUAR, wrote a letter to the High Commissioner asking her to help her find out about her brother whom she has not seen for four years. Zhang Haitao was reportedly arrested after criticising government policies including violations of the right to freedom of religion or belief faced by Uyghurs in XUAR.

According to the BBC news report, the organisation spent several months authenticating files which were passed on to the BBC by the researcher Dr Adrian Zenz, who received them from an anonymous source who “claims to have hacked, downloaded and decrypted the files from a number of police computer servers” in the XUAR. An analysis of the data by Dr Zenz shows that in just one county in southern Xinjiang, more than 12% of the adult population were in either a camp or a prison in the years 2017 and 2018.

The BBC states that the ‘Xinjiang Police Files’ include more than 5,000 police photographs of Uyghurs taken between January and July 2018, and that at least 2,884 of the people photographed have been detained either in prisons or in “re-education camps”. The youngest was just 15 years old at the time of her detention, the eldest was 73.

The files also include classified speeches by senior officials, police manuals, details for more than 20,000 detained Uyghurs, and photographs from highly sensitive locations. According to the BBC, one document says that, in the event of an attempted escape, the camp’s armed police “strike group” must fire a warning shot, and if the “student” continues to try to escape, to shoot them dead. The documents also say that camp “students” being transferred to other facilities should be blindfolded with their hands and feet bound.

Many people have been detained in the camps or sent to prison for peaceful religious activities or expressions of religious identity. One man was jailed for 10 years in 2017 for having “studied Islamic scripture with his grandmother” for a few days in 2010. Others have been detained for growing a beard, preaching, or for being related to someone already detained.

CSW’s CEO Scot Bower said: “The ‘Xinjiang Police Files’ reveal further shocking details of the brutality of the human rights situation in the Uyghur region, and add to a growing body of evidence that paints a picture of the widespread and systematic campaign of repression against a specific people group. The religious element is clear, as evidenced by some of the reasons given for the detention of these individuals. As the Chinese government continue to claim that these camps are training centres or schools, we ask what kind of school has a shoot-to-kill policy for students who try to leave, or transports students in handcuffs and blindfolds? International action remains vital, and the UN High Commissioner’s visit this week must provide a clear starting point to bring an end to these egregious crimes and to hold the Chinese Communist Party to account for its actions.”