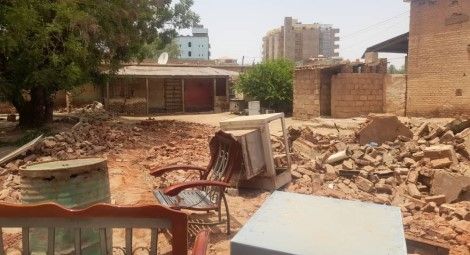 The site of the attempted demolition in Omdurman

A court in Sudan has approved the demolition of a 2000 square metre block of properties owned by the Sudan Presbyterian Evangelical Church (SPEC) in Omdurman, Sudan’s second city.

The properties adjacent to the church comprise three homes that are rented to private tenants, three medical clinics, two laboratories, a pharmacy and a shop. The tenants, owners and the legitimate administrative committee of SPEC did not receive legal notification of the decision and only became aware of the plans when police officers arrived at the properties on 25 May.

Among the significant police presence which arrived at the premises on 25 May were four trucks and members of the armed police units who displayed their weapons. Some of the tenants were able to submit an appeal, and the court has stayed the demolition order until 7 June. Prior to the second order, three homes, including that of a 75-year-old man, and several businesses were destroyed.

A church leader who asked not to be named told CSW: “If this demolition is allowed it will be a disaster for the families and businesses who, without notice, could lose everything. For the church it is yet another blow in the struggle to control and administrate their land, and forms part of the exhausting discrimination that the Christian community is subjected to by the authorities. We had no notice of this decision, and have had to gather lawyers and attend the court to try and prevent this unlawful action in the knowledge that some may be arrested for standing up for their rights and we will once again be forced to defend ourselves through the criminal courts.”

The properties are in a prime location in Omdurman across from the main hospital, and are of significant financial value. A number of the homes are rented to members of church and clergy, who previously faced legal challenges to evict them during the al Bashir regime. It is suspected that individuals who sit on an illegitimate government-constituted committee are working together with government officials and investors to seize the land.

In Sudan, church committees recognised by the Ministry of Guidance and Endowments, which oversees religious affairs, are legally empowered to control a church’s affairs. During the al Bashir era, the government abused this provision in order to retain significant control over the internal processes of churches, and to further restrict the rights of Christians. Interference in church affairs was commonplace and was primarily undertaken by National Intelligence and Security Service (NISS) officers, who pitted Christians against each other. The government would subsequently claim that disputes such as those concerning different committees were an internal church matter that did not involve the state.

During the transitional period, some important steps were taken to improve the protection of freedom of religion or belief (FoRB). While slow to address the issues of church interference, the Ministry of Guidance and Endowments reached an agreement with the legitimate administrative committee of SPEC for administrative control over the church’s affairs. However, in November 2021 a judge dismissed this agreement . The decision came shortly after the military coup of 25 October 2021, and the steady rise in influence of the National Congress Party (NCP), the party of former president Omar al Bashir.

CSW’s CEO Scot Bower said: “We are alarmed by the attempt to demolish significant properties belonging to the Sudan Presbyterian Evangelical Church (SPEC) without notice. We urge the Sudanese authorities to review this decision, mindful of the fact that such a demolition will empower those with no legitimate standing to act on behalf of the church. We call on the international community to remind the military leadership of its de facto responsibility in Sudan to protect human rights, including freedom of religion or belief, and to uphold the principle of non-discrimination.”