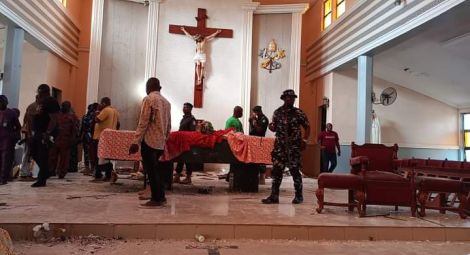 At least 50 killed in terrorist attack on Catholic church

At least 50 people were killed and over 70 were injured in a terrorist attack on St. Francis Xavier Catholic Church in Owo, the headquarters of Owo Local Government Area (LGA) in Ondo state, southwest Nigeria, on 5 June. A large number of children are reportedly among the casualties.

According to reports, gunmen wearing military camouflage, wielding AK-47s and identified by several eyewitness as being of Fulani origin attacked St. Francis Xavier Church in Owo at around 12pm as the Pentecost Sunday service was coming to an end. The attackers reportedly threw explosive devices into the building before opening fire indiscriminately. As church members moved quickly to shut the doors, they began shooting through the windows. According to eyewitnesses, many of the casualties had left the building early, with one witness stating “people died all around the church,” including a woman with four children and a man selling confectionary outside the building.

Video footage and photographs circulating on social media following the attack included footage of several victims lying on the floor of the church, and of an elderly woman sitting on the ground outside the church cradling a toddler in a bloodstained white dress. The reportedly large number of child victims may be due to the fact that the church has “a particular section for children to [sit] when they finish from their Sunday school… so that when the priest is passing, they can give him their ornaments, their rosaries, for him to bless.”

While it was initially reported that the priest in charge of the church had been kidnapped, the Catholic Diocese of Ondo Directorate of Social Communications later clarified that the priests and Bishop of the parish were safe.

The assault on the church reportedly continued for 20 minutes and could be heard from the nearby Methodist Church. However, police officers stationed close to the area failed to respond. One eyewitness insisted it was “not possible that the police did not hear the gunshots or bangs … Even when we came out and tried to help the injured out of the church, there were no security or emergency services around. People from town were our first responders.”

Describing the attack on St. Francis Xavier Church as “raw persecution”, the Christian Association of Nigeria (CAN) called on President Muhammadu Buhari to “stop the recycling of … criminals and terrorists in the name of de-radicalising programme,” and to find a lasting solution to “the unending killings in the country.”

CSW’s Founder President Mervyn Thomas said: “This horrific attack marks a significant escalation in terrorist violence in the southern part of the country. We extend our heartfelt condolences to the families and loved ones of all those who lost their lives, and wish the injured and traumatised a swift and full recovery. Once again, those charged with ensuring security have failed to respond in a timely manner, providing the latest indicator of an official inability to protect the lives of vulnerable civilians. We call on the Nigerian government to ensure that all those responsible for this appalling attack are held to account, and to significantly enhance efforts to combat these increasingly well-armed and co-ordinated non-state actors.”

The attack on the church is the latest event in escalating violence by militia of Fulani origin in southern Nigeria, who are now known to have developed links with terrorist factions. Attacks in 2021 caused thousands of villagers from Yewa in Ogun state to seek shelter in Pobe in neighbouring Republic of Benin, where they remain to this day.

As has already occurred in northwest and central Nigeria, the current violence in the south is exacerbating tensions between indigenous communities and ethnic Fulanis. Following the attack on the church in Owo, human rights lawyer Abdul Aminu Mahmud warned: “From the valleys of northern Edo to the plains of Ondo - that vast area historically known as Kukuruku - Fulani herdsmen are maiming and killing locals. We must [learn] from the ethnic strifes in Nargono-Karabakh and Rwanda. We must learn. Buhari must pull Nigeria from the brink that his brothers are pushing Nigeria.”

Emphasising the terrorist links, investigative reporter David Hundeyin said: “These are actual terror attacks by groups linked to ISIS, Ansaru, Boko Haram etc. The individuals may or may not be Fulani, but that's beside the point. … There are full-fledged terror cells embedded across southern Nigeria awaiting activation. I'm not spreading fear.  …The terrorists are here. It's not "Sambisa Forest" anymore.”

On 29 May, one week prior to the attack on St. Francis Church, the Prelate of the Methodist Church Nigeria, Most Rev Dr Samuel C. Kanu Uche, the Bishop of Owerri, Rt Rev Dennis Mark, and the Prelate’s Chaplain, Very Rev Jeremiah Shittu, were abducted by eight gunmen of Fulani ethnicity whilst on an official visit to Abia state in the southeast. The three men were released on 30 May upon payment of N100 million (around £190,000 GBP) in ransom.

The Prelate later related how he and his colleagues were assaulted and tortured, and alleged that military personnel of Fulani extraction stationed in the area were assisting their abductors. Worryingly, he also stated that one of their assailants, who work as herders by day and kidnappers by night, had boasted to them “that after buying enough weapons, they will bring all those that have been put in disarray and have been driven away from Zamfara, Katsina, Sambisa Forest, that they are all coming to locate themselves in Igbo land… and then they will deal with us. He said: ‘do you know Ibadan-Lagos Expressway? We are in all the bush there. We are everywhere there. We are also in the South-South. So, we are waiting for the slightest signal; we will finish you people and take over this land.’ They claimed that Nigeria belongs to Fulani."

The Prelate’s narration confirmed that of the late former Deputy Governor of the Central Bank of Nigeria Dr Obadiah Mailafia, who was among the first prominent Nigerians to raise the alarm about the current violence in southern Kaduna - where thousands have been killed and tens of thousands displaced from Christian communities in militia attacks, the infiltration of extremists of Fulani ethnicity across the country, including in southern Nigeria, and their links with terrorist factions during a radio interview in 2020.

Among other things Dr Mailafia had concurred that elements in the security forces were colluding with the perpetrators of attacks on farming communities, and highlighted the links between the terrorist networks and the armed non-state actors formerly referred to as bandits: “When they finish these rural killings, they will move to Phase Two. The Phase Two is they will go into the urban cities going from house to house, killing prominent people. ... This is the game plan. By 2022 they want to start a civil war in Nigeria.”