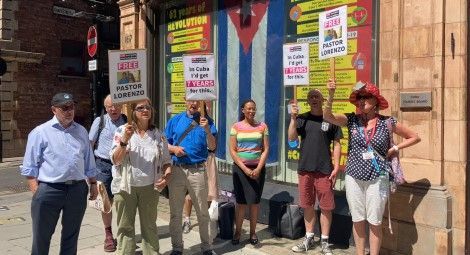 A demonstration organised by CSW was held today outside the Cuban Embassy in to mark the first anniversary of unprecedented nationwide protests in Cuba and the detention of Protestant pastor Lorenzo Rosales Fajardo.

On 11 July 2021 spontaneous nationwide protests erupted across Cuba in response to an ongoing economic crisis and a record surge in coronavirus cases, expanding to criticisms of the Cuban Communist Party (CCP)’s decades-long hold on power, its crackdown on independent civil society including human rights and pro-democracy movements, and poor management of the COVID-19 pandemic. The Cuban Communist Party and military responded forcefully to the protests, with protesters violently beaten and detained, and independent civil society leaders including religious leaders summoned and threatened in the following months, driving record numbers to seek exile outside of Cuba.

Among those detained was Reverend Rosales Fajardo, who was arrested at the same time as his teenage son. While his son was released after being forcibly disappeared for one week, the pastor has remained imprisoned in Boniato Maximum Security Prison since August 2021. He was convicted of charges of ‘disrespect’, ‘assault’, ‘criminal incitement’ and ‘public disorder’ in a trial on 20 and 21 December 2021.

In May 2022 he and his family were informed he had been sentenced to seven years in prison, which was one year less than the eight-year sentence that was initially communicated in a document sent from the Permanent Mission of Cuba in Geneva to the United Nations (UN). His sentence was upheld following an appeal which was heard in court on 22 and 23 June 2022. Testimony for the defence was not permitted.

During the protest on 11 July 2022, CSW attempted to present the Cuban ambassador, Bárbara Montalvo Álvarez, with a petition signed by 8,322 people and calling for the pastor’s immediate release, however the Cuban Embassy refused to receive it.