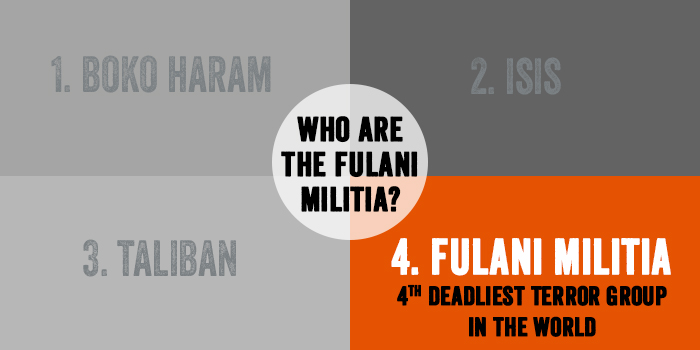 The Fulani militia (also known as Fulani herders) come from a nomadic, predominantly Muslim tribe. In 2014 the militia was named the fourth deadliest terrorist group in the world by the Global Terrorism Index.

In the south of Kaduna State in central Nigeria, one of the worst affected area, more than 800 men, women and children have already been killed and over 10,000 have fled their homes1. Fulani militia are targeting non-Muslim communities, particularly Christians. They’re attacking entire communities that are most isolated and individuals at their most vulnerable, including men and women working in their fields. The death toll is mounting and it’s vital we speak out now.

Why haven’t I heard more about this?
Good question. Even though this crisis is getting worse, there’s almost no coverage in the international media, or it’s misattributed to “clashes” between farmers and herders for scarce resources. So far the Nigerian government has failed to address the issue with the seriousness it deserves and the world’s indifference allows this situation to continue.

You may have heard about Boko Haram’s attacks in northern Nigeria. This destruction caused by the Fulani militia is just as serious and we must work to address both. We must speak up.

How will this petition make a difference?
Our campaign is focusing on one of the worst affected areas, the south of Kaduna State, and the State’s governor, Nasir el-Rufai. We’re petitioning him both directly, and through applying international pressure. It’s unusual for a state governor to get such international attention, and we hope this will spur him into taking effective action.

What else can I do?
Write to your MP or go to see them during their surgery hours. Share the concerns you’ve read about here and let them know that you want them to raise questions about this in Parliament.

I’ve heard about a famine in Nigeria?
This contributes to the famine. Central Nigeria is known as the breadbasket of the nation; however, because farmers are being killed in their fields, they’re afraid to go out to work. With nobody to tend the crops, they die: contributing to the current food shortage. It will only get worse unless we see action right now.

In an indication of the kind of devastation caused by the Fulani militia, in 2016 after visiting an area attacked by them, the representative of the United Nations High Commissioner for Refugees (UNHCR) and the Economic Community of West African States (ECOWAS) to Nigeria, said that in 20 years of working as a humanitarian she had “never seen such a level of destruction."

1. According to the Catholic Diocese of Kafanchan.