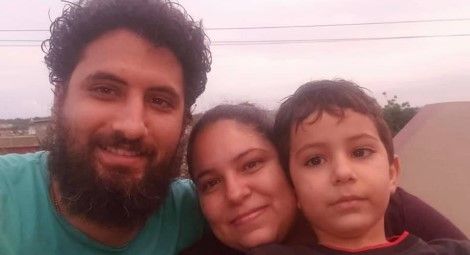 Family of detained pastor evicted from their home

The wife and child of Pastor Yarian Sierra Madrigal, who was detained amid unprecedented nationwide protests in Cuba on 11 July, were forcibly evicted from their home on 18 July.

CSW sources report that Claudia Salazar and the couple’s young son were forced to leave their home after their landlord was threatened by state security that he'd lose the property if he didn't evict them. They are currently staying in a local church.

Pastor Sierra has been detained alongside his colleague Yéremi Blanco Ramírez in poor conditions in a wing of the Matanzas women’s prison since 11 July.

In a statement published by Christian Today on 17 July, Mrs Salazar wrote: “My husband Yarian Sierra and our friend and brother, Yeremi Blanco, are honorable Cuban citizens. They have dedicated all of their youth and lives to serve the church and to serve others. Family men. Loving fathers, loving husbands, with an impeccable life testimony. They are not any kind of delinquent, nor are they low-lifes as those who govern this country call them. They are good men, they are men of God, who think differently, who abhor communism and who went out to express this just like any human being has the right to think and to say what they feel.”

CSW sources have also confirmed that another protestant pastor, Lorenzo Rosales Fajardo, is currently detained in a state security facility in Santiago. The Cuban government plans to charge him with ‘disrespect’, ‘public disorder,’ and ‘attacks.’ The pastor’s 17-year-old son, who was detained with him, was officially disappeared until he returned home on the evening of 17 July. He is also facing charges of ‘disrespect’ and ‘public disorder,’ and his mother described him as ‘psychologically traumatized’.

CSW’s Head of Advocacy Anna-Lee Stangl said: “The decision to evict Claudia Salazar and her son, particularly at this distressing time, is a vindictive and cruel act by the Cuban authorities, who should instead be concentrating their efforts on taking the calls of the ongoing nationwide protests seriously. We continue to call for the immediate and unconditional release of pastors Sierra Madrigal, Blanco Ramírez, and Rosales Fajardo and for all others detained in connection with the exercise of their fundamental human rights, and for the charges against Pastor Rosales Fajardo’s son to be dropped.”

For over a week, Cuban State Security has responded forcefully and violently towards nationwide demonstrations that erupted across the country on 11 July. Numerous religious groups on the island have been particularly outspoken in response to the government’s crackdown, affirming the right of the people to peacefully protest and condemning the Cuban president’s call to violence.  The country’s Evangelical denominations have called for a day of prayer and fasting on 21 July, the 62nd anniversary of the triumph of the Cuban revolution.