The story of Nguyen Van Dai, a lawyer sentenced to 15 years for defending human rights in Vietnam.

Human rights lawyer and activist Nguyen Van Dai provided legal advice and representation to victims of human rights abuses – including religious minorities – across Vietnam. As a result of his work, Dai has been repeatedly harassed and attacked by individuals working for the authorities.

CSW raised Mr. Dai’s case at every advocacy meeting, UN submission, and dialogue briefing on Vietnam we attended, as well as organising a letter writing campaign and co-ordinating protests in London, Ireland and the Czech Republic.

Finally, on 7 June, Mr Dai and Ms Ha were released into exile in Germany after two and a half years in prison. Mr Dai and his wife Khanh are now reunited at last.

"Thanks to your prayers, God intervened." Nguyen Van Dai

Four other human rights defenders tried at the same time as Nguyen Van Dai remain in prison, including Pastor Ton. You can write to him using our free resource.

11 May 2007: Dai is found guilty of “disseminating slanderous and libellous information against the Socialist Republic of Vietnam” under Article 88 of the country’s Penal Code, and sentenced to five years in prison, which is later reduced to four years.

9 March 2011: Dai is released to four years of house arrest and barred from practicing law.

13 April 2013: Dai is prevented from meeting with a US official as over twenty security officers and police block the way to his home. According to Dai, approximately ten of his supporters were arrested by security officers when they came to see what was happening. They were detained and questioned for five hours.

March 2015: As Dai concludes his house arrest, his home in Hanoi is attacked by “thugs” on 5 and 6 March. Dai called the local police but received no assistance.

6 December 2015: Dai and three of his friends are assaulted by approximately 20 plain-clothed police after attending a public human rights conference in Nam Dan District, Nghe An Province. During the assault Dai was pulled onto a motorcycle and driven to a different province about 20km away, where the beatings continued and he received a blow to the head. His possessions were confiscated, including documents, his phone, camera, wallet, jacket and shoes. He was also pushed into the cold sea.

16 December 2015: Dai and his colleague, Le Thu Ha, are taken into police custody in Hanoi. At the time of his arrest, Dai was preparing to meet European Union representatives who were in Hanoi for the annual EU-Vietnam human rights dialogue.

“These detentions underscore the fact that despite some improvements in the level of religious freedom and the registration of new groups in the past few years, citizens are still not free to fully exercise their human rights and to advocate for the rights of others.” Mervyn Thomas, Founder President CSW

Dai spends over 18 months in detention without trial. Little is known about his condition and treatment.

8 August 2017: Activists in London, Dublin and Prague mark the 600th day of Dai’s imprisonment with solidarity action, including by drawing 600 chalk lines on the path leading to the Vietnamese embassy in London.

5 April 2018: Dai is among six human rights defenders given prison sentences for ‘carrying out activities aimed at overthrowing the government’ under Article 79 of the Vietnamese penal code.

Nguyen Van Dai received the longest sentence of 15 years in prison and a further five years under house arrest. 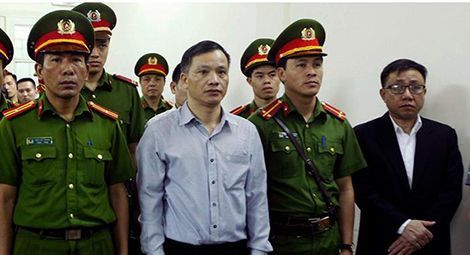 7 June 2018: Dai and Le Thu Hua are released into exile in Germany.

“We welcome the release of Nguyen Van Dai and Le Hua Tha, after a sustained global advocacy campaign by Vietnamese and international organisations. However, we oppose the condition that they have to leave Vietnam in order to secure their freedom, which amounts to involuntary exile. We condemn the targeting by the authorities of both Nguyen Van Dai and Le Thu Ha, and the unfounded charges levied against them simply for advocating for the rights of their fellow citizens.” Mervyn Thomas, Founder President, CSW