M&S signs the Call to Action

On 6 January 2021, Marks & Spencer became the first top-tier global retailer to publicly sign the Brand Commitment to Exit the Uyghur Region, providing assurance to its customers that its products won’t be linked to the abuses of Uyghurs.

So how did we get here and why is this breakthrough significant?

The Road to Breakthrough 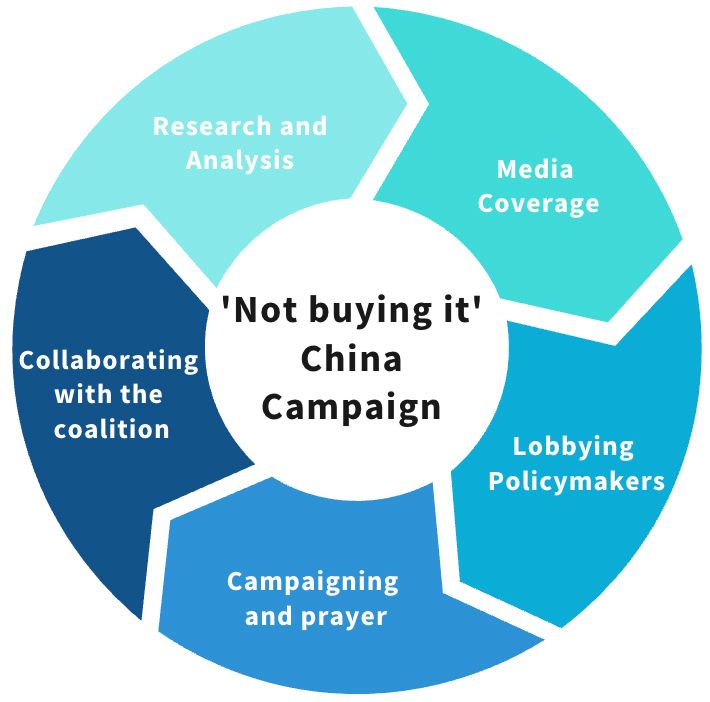 October 2018: CSW published a report on ‘Mass arbitrary detentions in the Xinjiang Uyghur Autonomous Region’, as well as targeted briefings that highlight specific aspects of the detentions in Xinjiang, to share with relevant UN Special Procedures.

February 2020: CSW published a report, ‘Repressed, Removed, Re-educated: The stranglehold on religious life in China’ – research that laid the foundations for our campaigning and lobbying.

April 2020: 1,648 supporters wrote to their MPs raising the Uyghur crisis and China’s ‘re-education camps’. Our Parliamentary Officer also met with ten MPs and provided over 60 briefings ahead of debates throughout the year.

August - December 2020: The Coalition to End Uyghur Forced Labour engaged with M&S regarding the Call to Action.

September 2020: 135 MPs signed a cross-party letter to the Chinese Ambassador, condemning the treatment of Uyghurs.

In an open letter to the UN Secretary-General, the UN High Commissioner for Human Rights and UN Member States, CSW joined 300 NGOs in calling for international human rights monitoring mechanisms in China.

CSW launched its campaign targeting M&S. 1,469 supporters emailed M&S, urging it to sign the Call to Action, and Christian Today published an article on the campaign.

October 2020: Supporters received a direct response from the Head of Responsible Sourcing at M&S and replied – asking M&S again to sign.

CSW submitted evidence to a UK parliamentary inquiry into Xinjiang detention camps and endorsed a submission by members of the Coalition to another inquiry into the use of Uyghur forced labour in UK supply chains.

278 supporters emailed M&S a third time, urging it to put its words into action by signing the Call to Action.

6 January 2021: M&S formally signed and announced its commitment to the Call to Action.

Since around 2017, between one and three million Uyghurs, Kazakhs and members of other predominantly Muslim ethnic groups have been detained without charge in political ‘re-education camps’ in the Xinjiang Uyghur Autonomous Region, where they are detained and maltreated because of their ethnicity and religion.

Many of those released are sent to work in clothing factories in the region and across China that supply Chinese and Western brands. There is also evidence that, in some cases, factories are in the same compounds as the camps.

Credible reports have implicated dozens of Western brands in using these factories in their supply chains. However, virtually the entire clothing industry is potentially tainted by forced labour because around 84% of China’s cotton output comes from the Uyghur Region.

Signing the Coalition to End Uyghur Forced Labour’s Call to Action makes retailers accountable for cutting all ties with suppliers that are implicated in forced labour, and ending all sourcing from the Uyghur Region, from cotton to finished garments, within twelve months of signing.

As part of the Coalition, our strategy is to create a domino effect so that as more brands sign the commitment, it becomes untenable for others not to. We believe that if enough brands refuse to buy cotton from the Uyghur Region, this will push the Chinese government to stop subjecting Uyghur people to forced labour.

(This campaign for the Uyghur people, and against forced labour in the Uyghur Region specifically, is just one part of our advocacy work for freedom of religion or belief in China.)

Now we look to other major brands to follow M&S and commit to the Call to Action urgently. We’re continuing to pressure ZARA – you can write to them here.

You can also encourage the brands you buy from to sign the brand commitment. Have a look at our suggestions here.

CSW continues to work with a broad range of partners to raise awareness and prayer for religious minorities in China, for example co-hosting ‘Together for Uyghurs – a Holocaust memorial event’ in January 2021.

Other 'Not buying it' actions

'Not buying it' FAQs

How to Campaign resource