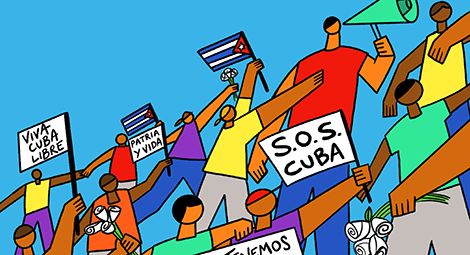 CSW has today published a new report on freedom of religion or belief (FoRB) in Cuba which finds that the number of documented FoRB violations increased in 2021 amid a widespread crackdown on unprecedented civil unrest.

The report, entitled ‘Homeland, Faith, Life: a call for freedom in Cuba’, documents 272 cases involving 498 violations of FoRB 2021, up from 203 cases in 2020 and 260 in 2019. Documented violations include arbitrary detention, denial of religious visas, threats, harassment and physical abuse, forced closure of places of worship, prevention from attending religious services, prevention from travelling abroad, and the loss of employment.

The report explores in depth the Cuban authorities’ crackdown on religious leaders and adherents who participated in peaceful protests which spread across the country on 11 July 2021. CSW received confirmed reports of eight religious leaders who were arbitrarily detained in connection with the protests, sometimes violently, including Protestant Pastor Lorenzo Rosales Fajardo, whose case is ongoing. Pastor Rosales Fajardo has been imprisoned since 11 July; he was tried on 20 and 21 December and is still awaiting the news of his sentencing. The government has requested ten years imprisonment.

Despite these and other concerning developments, the report highlights that there were some limited positive steps in the country in 2021, including most significantly the increased willingness of religious leaders to speak out publicly regarding violations of human rights.

It concludes: “Going forward, it will be vital that independent civil society in Cuba, including religious groups, continue to receive support from the international community. It must be made clear to the Cuban government that it must make long-overdue reforms to ensure that the fundamental rights of all are protected and upheld – and there must be consequences if it does not. After over 60 years of one-party authoritarian rule, it appears that the Cuban people are ready for change. Democracies around the world should be actively exploring innovative ways to support them to ensure that any transition is peaceful and moves to a more representative, inclusive and open democratic society.”

CSW’s Head of Advocacy Anna Lee Stangl said: “The situation for religious and belief groups in Cuba grew even more concerning in 2021. Even as the country continues to struggle with the effects of the COVID-19 pandemic and chronic shortages of essential items, the Cuban Communist Party appears set on tightening restrictions on the rights of its people and crushing all forms of dissent. Religious and belief groups, which together comprise the largest sector of independent civil society are viewed as a serious potential threat to the system. We urge the international community to take heed of the calls of this report, and we reiterate our unwavering support for all those in Cuba who are calling for and working towards a Cuba in which in everyone is free to believe.”